Qinhuangdao Glass Museum is the first glass museum in China. It is located at No. 44 Wenhua Road, Haigang District, and is built on the site of the century-old Yaohua Glass Factory with an area of 11.28 mu. The museum was opened free to the public on August 6, 2012. The rich collection of exhibits, elegant art, and cultural atmosphere in the museum have won praises from cultural and musicological circles at home and abroad, and has attracted visitors from all walks of life. 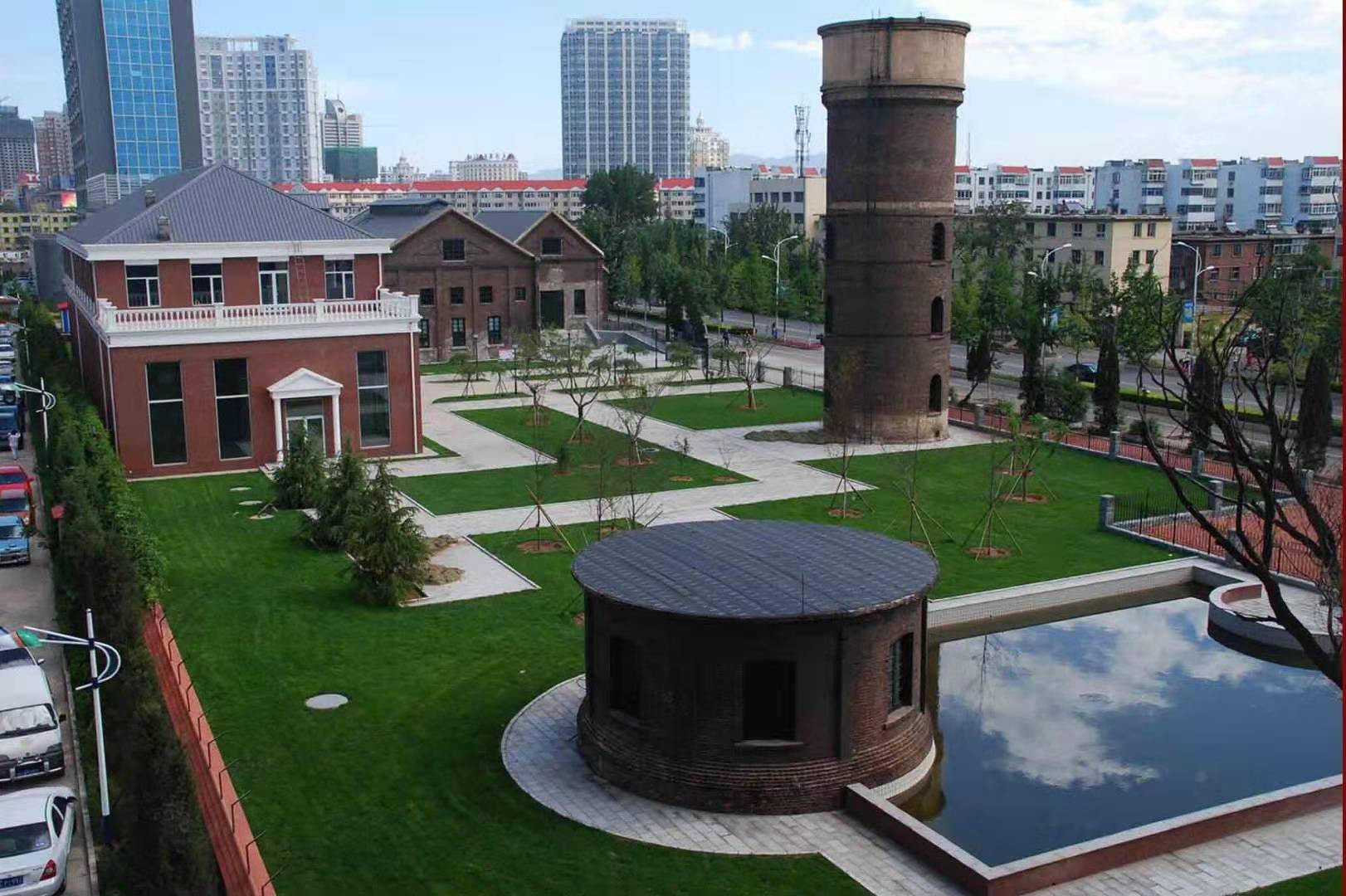 Hailed as the “cradle of glass industry in China”, Yaohua Glass Factorywas built as the first glass factory in Asia in 1922, and entitled Qinhuangdao the  “Glass City”. In 2008, with the development of the city, the Yaohua Glass Factory retreated from the urban area to the suburbs. In order to record its history, Qinhuangdao has retained some of the industrial buildings and transformed them into a glass museum with a total investment of 31.5 million yuan, aiming to “pass on civilization, create highlights, educate in entertainment, and serve the society”.

The fascinating Qinhuangdao Glass Museum, home to a variety of glass items, consists of exhibition area, ruins park, theme restaurant, and office area, with a building area of 2,822 square meters. It has an audio guide service system in three languages, providing free narration to the public at certain times every day. It is a public cultural facility integrating collection, research, education, display and leisure, and a beautiful business card showcasing the deep integration of Qinhuangdao culture, tourism and industry.

The main exhibition hall is 1,500 square meters, with the exhibition line of 333 meters, and the exhibits of 1022 pieces (sets). With the theme of “Tian Di Ning Guang (Light of Heaven and Earth)”, the exhibition is divided into four parts: “Ancient Glass”; “The Cradle of Glass Industry in China”; “Contemporary Glass Industry in China”; and “Glittering Glass Art comprehensively displaying glass history, culture, craft, and art with pictures, scenes and landscapes, models, videos, a sand table, paintings, and other artistic techniques.

The exhibits include not only glass art treasures embodying contemporary art, but also  glass ornaments reflecting the folk culture, as well as exotic treasures, fully demonstrating the important role and unique cultural and artistic charm of glass in our daily life. The exhibition is divided into two units: Ancient Western Glass and ancient Chinese Glass.

Around 2500 BC, artificial glassware appeared in the western world. Starting with the artistic scene The Legend of West Asian Glass, the ancient western glass showcase introduces the process from stone to glass, showing the representative objects of major crafts like “glazed sand,” “rolling core,” “moulding,” and “blowing”, which have been unearthed in West Asia over a history of 4,000 years, showing the improvement and development process of western glass through ancient civilization, classical civilization, the medieval age, and the Renaissance.

The crystal glass bowl, the mysterious human face glass bottle, the complicated mosaic and mixing glass bottle, and the regional style glass single ear pot are all rare Western glassware products. Among them, the landscape wall Stained glass of Church in Medieval Era mainly reflects the evolution of medieval European glass craft and the integration of glass art and religion.

In the early Western Zhou Dynasty (the last half of the 11th century BC), the earliest glass products were found in China. In ancient Chinese literature, the glass (or li in Chinese) was called “Qiu Lin,” “Lu Li,” or “Liu li” from the Warring States period to the Tang Dynasty, and “Liu li,” “Yao Yu,” “Xiao Zi Liao Qi,”or “Bo Li, after the Tang Dynasty. Ancient Chinese glass comes from the same origin as China’s original enamel and bronze smelting technology. It is unique in the ancient world. Western envoys presenting gifts of class craft to the emperor of Qing Dynasty link the Chinese glass exhibition areas with the Western one. The Ancient Chinese glass exhibition starts from the Western Zhou Dynasty to the Ming and Qing Dynasties, vividly demonstrating the beginning, evolution, development of China's glass culture and the production status in different periods. These fine cultural relics reflect the history of ancient Chinese glass history.

Yanshen Town, Zibo City, Shandong Province in the Ming Dynasty was a concentrated place for glass production. The restoration of the street scene reproduces the charm of Boshan Yanshen Town--the glass capital of the Ming and Qing Dynasties-- including the workshop for making glassware, the craftsman who blows glassware, the vendor who sells glassware--restoring the historical memory of ancient Chinese glass production.

In ancient China, glass was also called "Liu Li", which was endowed with literary and religious flavor by literati and eminent monks. It is one of the "seven treasures" of Buddhism and ranks the first among the "China's Five Famous Instruments". Buddhism believes that the glaze is the embodiment of the realm of the millennium practice. The glass gourds unearthed from Buddhist pagodas are the supreme container for the Buddha's bone relics.

2.Cradle of Glass Industry in China

In the 4th century, the Romans began to apply glass to doors and windows. In the 17th century, large pieces of glass could be made, and industrial glass represented by flat glass began to enter the historical stage. In 1903, Emile Forker, who was Belgian, invented the eponymous slotted vertical lead method , the technology of continuous manufacturing flat glass with machine, which laid the foundation for the establishment of contemporary large-scale glass industry. 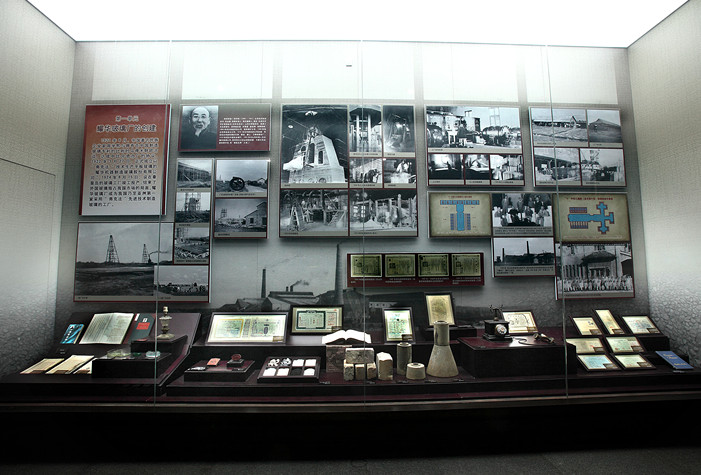 In August 1921, Zhou Xuexi, a famous Chinese national entrepreneur, negotiated with the Belgian Udemi Consortium, which owned glass manufacturing patents in China, to reach an agreement on the Sino-Belgium joint venture. On March 27, 1922, the Yaohua Machinery Manufacturing Glass Co., Ltd., which produced flat glass with the  “Forker Method” was established. It was completed and put into production on August 15, 1924, ending the foreign glass monopoly in the Chinese market. Yaohua Glass Factory became the first factory in China and even in Asia to manufacture glass using the advanced technology of the "Forker Method". 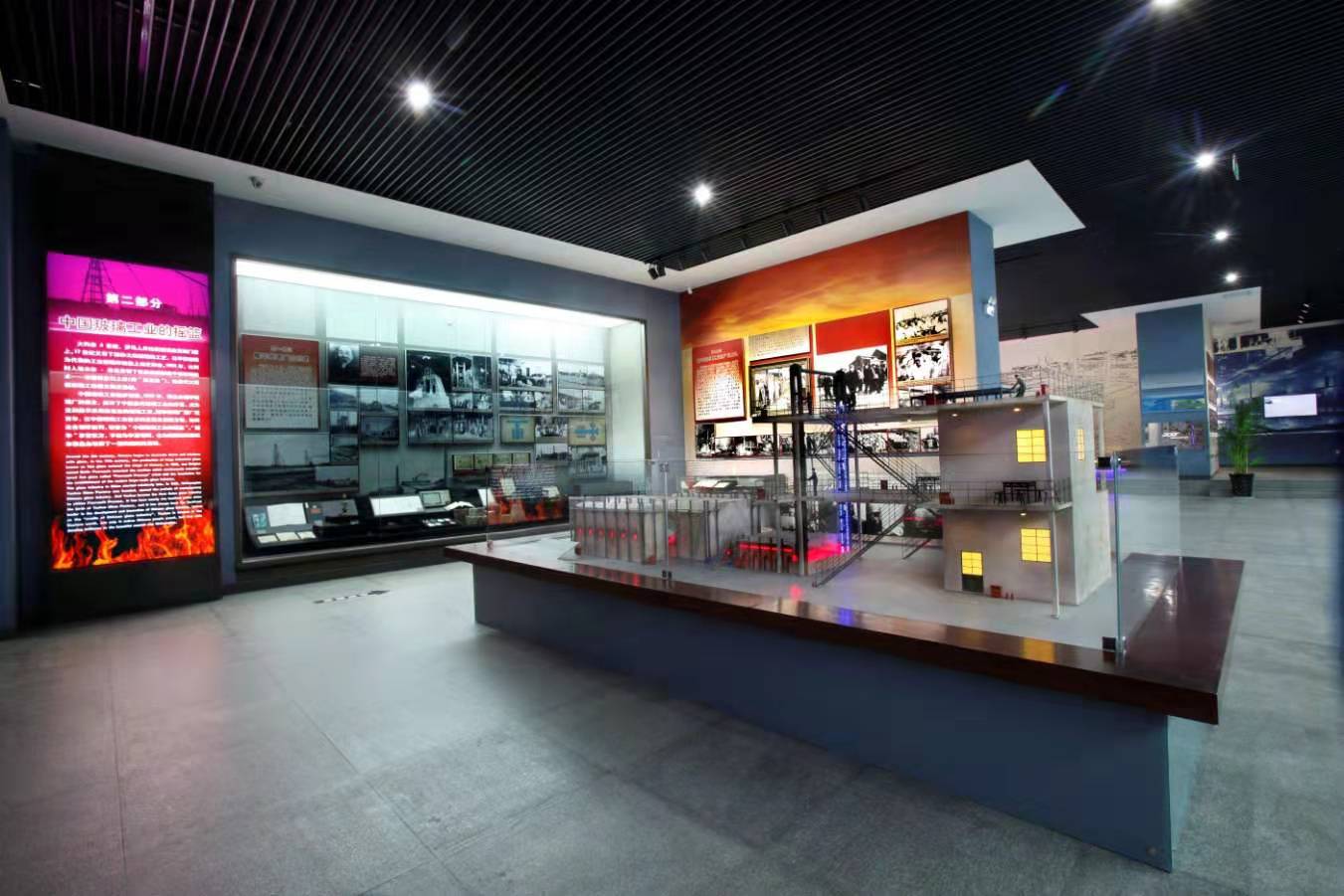 Yaohua Glass Factory shares a common fate with Chinese modern industry. The exhibition area consists of historical relics of Yaohua factory, precious photos, and production tools, recording the years of ups and downs of the national industry. Against the backdrop of “ saving the nation by industry”, the factory was established, and has survived from the periods before liberation when the inferior national industry fought and compromised with foreign capitals. After liberation, it experienced  “10-year construction,”  “reform and opening up,”  “public ownership” under a “shareholding system,” and operationally, the  “Forker Method,”  “Floating Method”, electronic model of the proportional production lines,  “ordinary glass” and "special glass" production lines. For several decades, Yaohua has been playing the leading role in the glass industry in New China, responsible for the scientific and technological research of the glass industry, supporting glass enterprises at home and abroad, and leading the development and innovation of China's glass industry.

With the development of China's glass industry, various glass enterprises have flourished in China, and the types and uses of glass products are increasing. On September 23, 1971, the first float glass production line developed and designed by China was put into operation in Luoyang, giving birth to the “Luoyang float glass process of China”. It has become one of the three float crafts in the world, along with the British Pilkington float, and the American PPG float. Since then, the development of China's glass industry has opened a new page.

In order to meet the needs of industry and daily life, glass has been reprocessed into new products with different shapes. In particular, glass has the characteristics of transparency, heat conduction, insulation and corrosion resistance, and so has been widely used in various industries as a magical material that is difficult to replace. Even so, many new properties and new functions of glass have yet to be recognized, and are waiting for discovering and exploring. In the unpredictable future, it may still be a colorful glass world.

The exhibition area has demonstrated the brilliant achievements of China's contemporary glass industry since the reform and opening up through large exhibition cabinets, composite drawings, and exhibits with 311 items of 26 types of glass. Among them, bulletproof glass, self-cleaning glass, aerospace glass, and other products filled the gap in China's glass industry. In this museum, we can not only see China's  “various contemporary glass products”, but also learn the glass knowledge on its properties, production, development and application such as:  “Why is glass transparent?”:  “Performance of glass”; or “The future glass”. 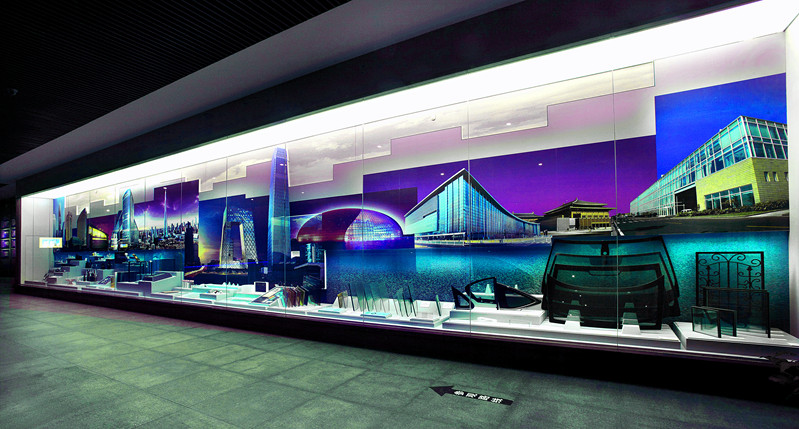 Glass has  been a carrier of artistic creation since its birth. The whimsy of the artists injects color and soul to the glass, so that it sends forth the rays of art through time and space.

There are intangible heritage showcases in the exhibition area, displaying two sets of artworks including snuff bottle paintings and glass lamps, which were made by the masters such as Zhou Leyuan and Chen Shaofu in the Qing Dynasty more than two hundred years ago. They silently tell the story of that era and highlight the exquisite craftsmanship of snuff bottle painting.

In order to increase the fun and participation of the museum, this exhibition area has also carefully set up various interactive kiosks for topics such as on-site glass production, glass painting, glass beading, and kaleidoscope. It is full of people and fun every holiday and vacation. 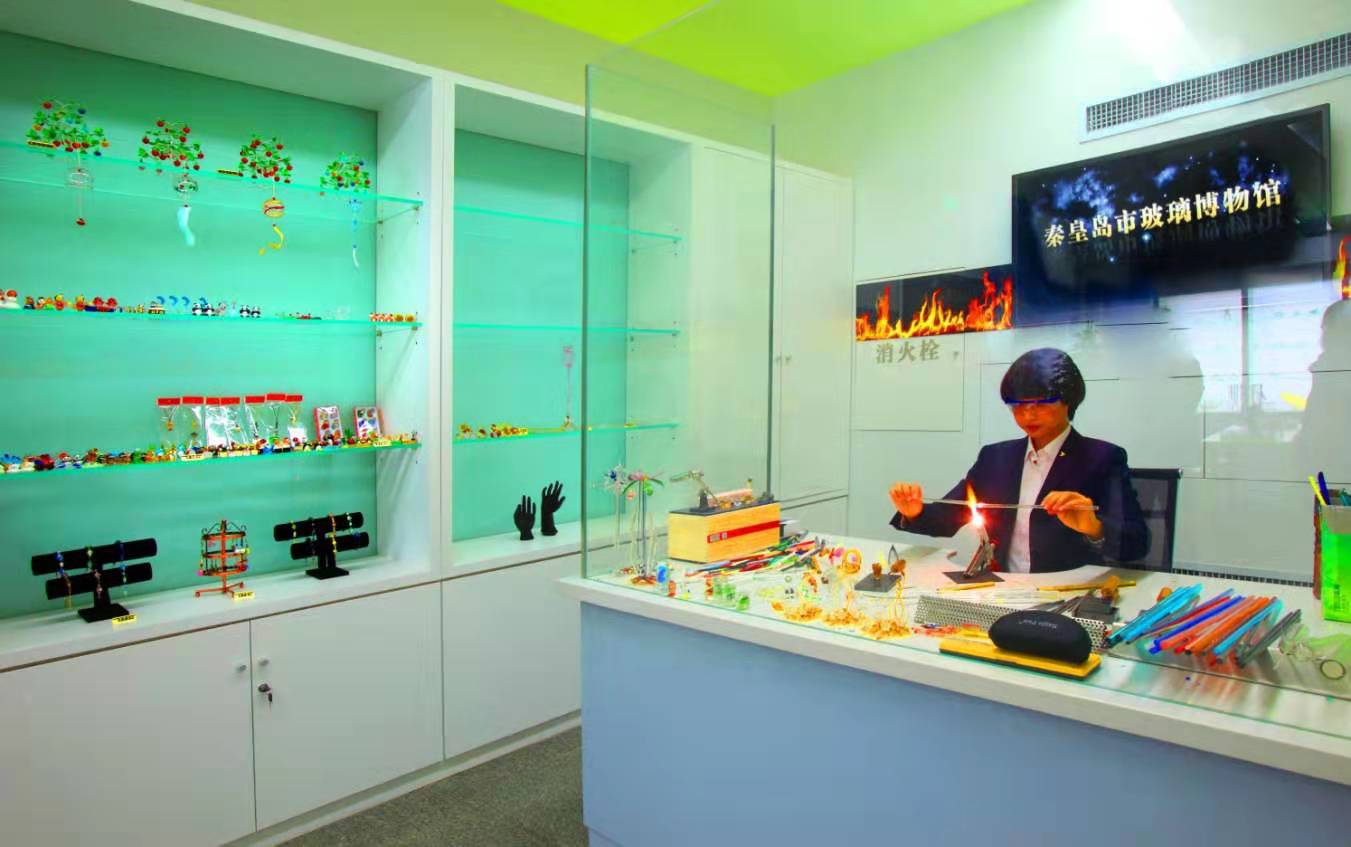 The central theme sculpture  “Light of Heaven and Earth” consists of three parts: the bottom is a cracked rough cubic natural rock; the curved body in the middle is like a rising flame; and the top is a crystal clear glass. It shows the process in which glass originates from the heaven and earth, then finally takes shape by fire quenching.

Window of Light--the wall decoration surrounds and complements the sculpture. On this curved wall representing heaven, there are windows of different sizes and shapes. From these mysterious windows, soft and pleasing light is revealed, expressing the warmth and brightness brought by the transparent glass. The glittering glass brings the light and bright future to the world. 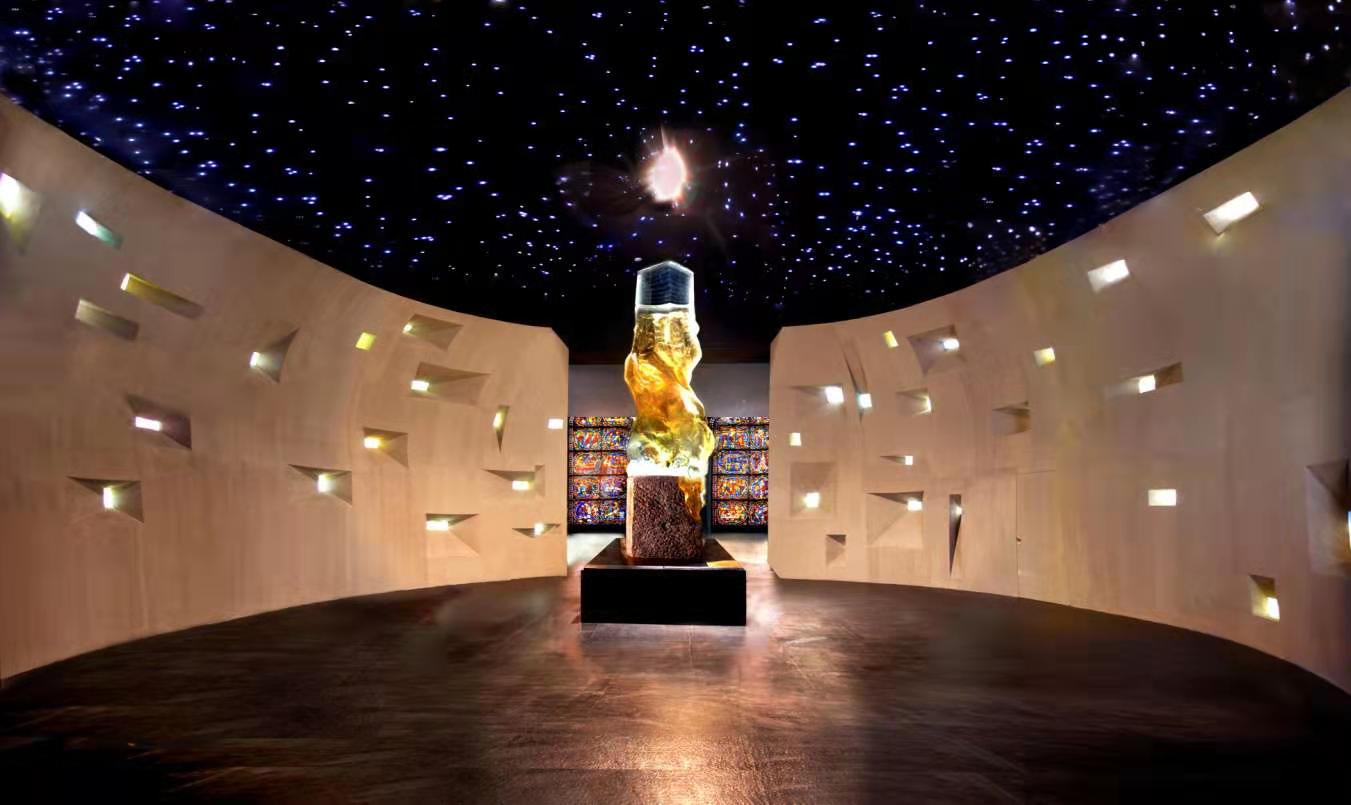