She is Ding Yuqi, the sports talent of Qinhuangdao of this “Peak Cup”.

Ding Yuqi has loved sports such as swimming, badminton, and tennis since childhood. At 7:10 on August 1, 2018, Ding Yuqi, who was only 14 years old and had not received professional mountaineering training before, successfully reached the 5,895-meter Mount Kilimanjaro, the highest peak in Africa, under the leadership of her uncle. Ding Yuqi (right), who has never received professional mountaineering training, stands on the top of Mount Kilimanjaro, the highest mountain in Africa.

“I was extremely excited when I stood on the top of Mount Kilimanjaro and looked down on the land of Africa. That feeling was beyond words. After all, this is my first climbing, and I reached the top of the highest mountain in Africa.” Ding Yuqi said when she was interviewed by reporters on the video.

Since then, Ding Yuqi began to engage in mountaineering formally, and did well due to her excellent physical condition and athletic talent. She can master the technical movements quickly that others will take a long time to learn.

According to her father, Ding Yuxin, climbing the Mount Everest was just a joke, but she took it seriously.

“After I returned from Africa, my dad asked me if I wanted to climb Mount Everest. At that time, I didn’t know what I would face and what I would give, but I was curious, so I agreed.” Ding Yuqi said.

In the following days, Ding Yuqi has been taking professional training in physical fitness, strength, skills, and use of climbing equipment every day. She didn’t give up with strong determination even the hands ached. “Once you have determined your goal, you must work hard for it. Life is like a progress bar, it won’t move unless you do so.” Ding Yuqi said.

After nearly 10 months of hard training, Ding Yuqi successfully reached the North Camp of Mount Everest at an altitude of 7,028 meters at 1:53 pm on May 8, 2019.

Before arriving at the North Camp, the guide was worried about her, and advised her to take oxygen. “I wouldn’t take his suggestion at first, but I was wrong, it really works, I climbed faster after I put on the oxygen mask.” Ding Yuqi recalled with a smile, “I didn’t prepare very well at that time, and there were something wrong with my physical fitness. I decided to train harder and strive to reach the top of Mount Everest next year.”

In September that year, Ding Yuqi began to challenge the 8,201-meter Cho Oyu in the Himalayas, the world’s sixth highest peak, but failed at 5:20 on September 27 due to the heavy snowstorm, she has climbed 8,009 meters, less than 200 meters from the peak..

“It was a pity, it’s too close to the highest peak.” she said.

In December 2019, Ding Yuqi went to Shuangqiaogou, Mount Siguniang, Xiaojin County, Aba Tibetan and Qiang Autonomous Prefecture, Sichuan Province, for an ice simulation training before climbing Mount Everest. She trained hard and repeated every movement for hundred times. At 8 o’clock on January 2 this year, Ding Yuqi successfully reached the No. 3 peak of Mount Siguniang at an altitude of 5,355 meters after nearly a month of simulation training.

Ding Yuqi (left) is on the top of the No. 3 peak of Mount Siguniang.

“I was anxious. This year’s window period for climbing Mount Everest was already late. It would be a pity if I missed it”  Ding Yuqi said.

After repeated adaptive training, Ding Yuqi and other team members set out on May 25 from Mount Everest Base Camp to Camp C1 (the North Camp) at an altitude of 7,028 meters, which is located at the junction of Mount Everest and Zhangzi Peak. It is a ridge long from north to south and short from east to west, all covered by thick snow.

After a night rest, the mountaineering team arrived at Camp C2 at an altitude of 7,790 meters on May 26, and arrived at Camp C3 (the summit camp) at an altitude of 8,300 meters the next day. On the early morning of May 28, the mountaineering team finally ushered in the summit after passing the first step (8,550 meters above sea level), the second step (8,680-8,700 meters above sea level), and the third step (8,800 meters) of Mount Everest, Ding Yuqi and all the climbers finally stood on the top of Mount Everest at an altitude of 8844.43 meters. 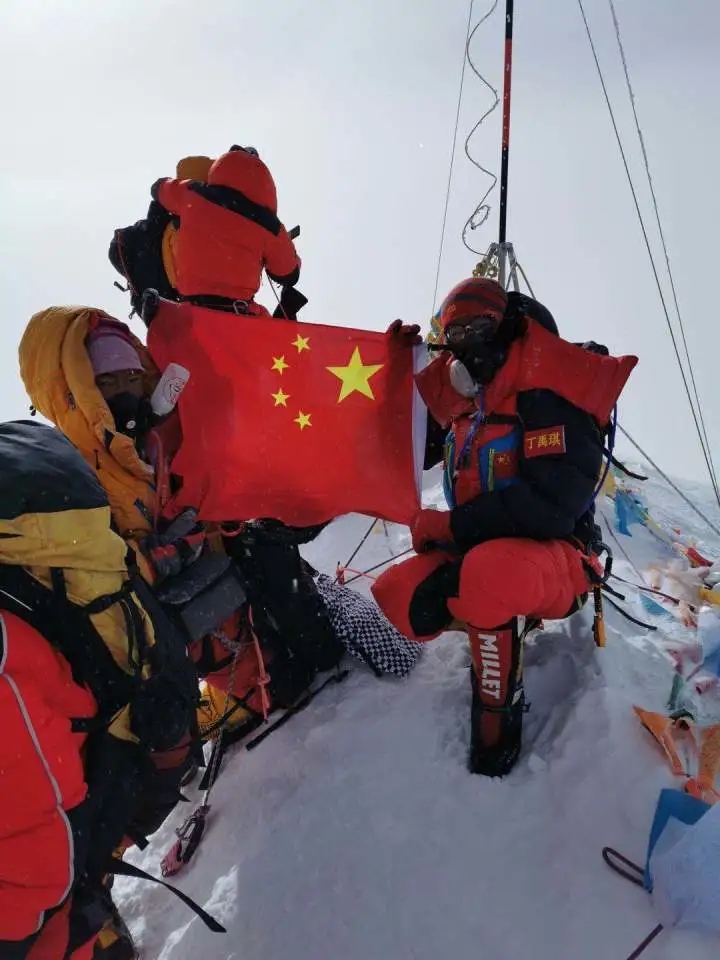 Ding Yuqi (right) poses with teammates on the top of Mount Everest.

“I felt I was flying when I stood on the top of Mount Everest. I did it!.” Ding Yuqi said. 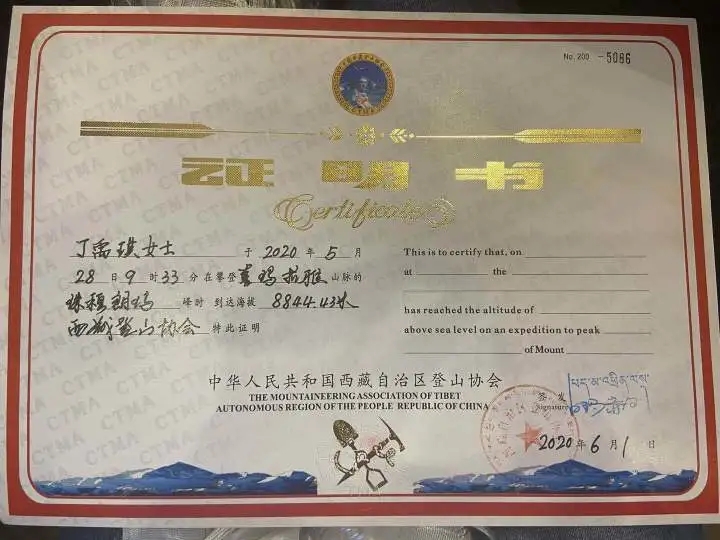 The certificate of reaching the top of Mount Everest issued to Ding Yuqi by the Tibet Mountaineering Association.

“The most difficult part in the whole journey is the second step. There is a vertical smooth rock more than 5 meters high, steep and narrow with a metal ladder on. It was dark, and we just moved slowly with the light of flashlight.” Ding Yuqi said, “But this is the charm of mountaineering. Every step forward is full of uncertainty.”

When it come to the future plan, Ding Yuqi said,  “First of all, I have to study at school. It depends on my future development whether I will engage in professional mountaineering.”

Although she doesn’t make her decision about that, Ding Yuqi also said that her next goal is to conquer the “7+2”, that is, the highest peaks of seven continents, and the north and the south poles. “You have to set a goal for yourself, or you will be lost.”