Inside and outside changes of Qinhuangdao

Inside and outside changes of Qinhuangdao

——A story behind the honor of “National Sanitary City”

The design parking spaces for motor vehicles and non-motor vehicles has improved the static traffic on the main streets of Haigang District and the image of the city. Photo by Shi Yuan/Hebei Daily

The neat and clean streets, picturesque parks, and renewed old communities make the whole city full of life, and bring the people sense of happiness... Recently, the National Patriotic and Health Association issued the “Decision on Naming National Sanitary Cities (Districts) for the 2018-2020 Cycle”, and Qinhuangdao was on the list and won the honor of “National Sanitary Cities”.

In recent years, Qinhuangdao City, on the basis of winning the honorary title of National Civilized City and National Forest City, has taken every effort to build a national sanitary city with the strength and wisdom of the whole city. The city is changing with each passing day, the management level has been significantly improved, and the quality of citizens has been enhanced. The transmutation inside and outside of Qinhuangdao has laid a solid foundation for the comprehensive construction of a modern and international coastal city and a beautiful port city in the new era.

Laying the foundation, making up for shortcomings and weaknesses, the city looks completely different

To create a national sanitary city, hardware construction is the foundation. Qinhuangdao City focused on the weak links of urban infrastructure construction, firmly stuck to key and difficult points, continued to lay the foundation, made up for shortcomings and weaknesses, and improved the outlook of the city.

On the afternoon of January 27, the weather was gloomy, but it did not affect the good mood of Qi Min. She and her two friends sang loudly with a melodious tune in the community’s activity room. She has lived in Chenguang Community, Beidaihe District for 20 years, and witnessed the changing of the community since the day it was renovated. She was pleased to see the environment become more beautiful day by day. “The old community has been changed significantly, now it feels like a high-end community.”

As a pilot city for the renovation of the old communities across the country, Qinhuangdao City insists on the simultaneous advancement of renovation and building of the national sanitary city, focusing on infrastructure upgrading on municipal supporting facilities, service facilities, garbage classification, and disease vector control for 389 old communities built before 2000 in the built area, paving the roads, cleaning the ground, fixing the street lights, dredging the pipelines, and introducing market-oriented operation of property management to 198 unmanaged old communities in downtown area.

The renovation of the old communities made residents more comfortable, and the “toilet revolution” made life more convenient for the people. 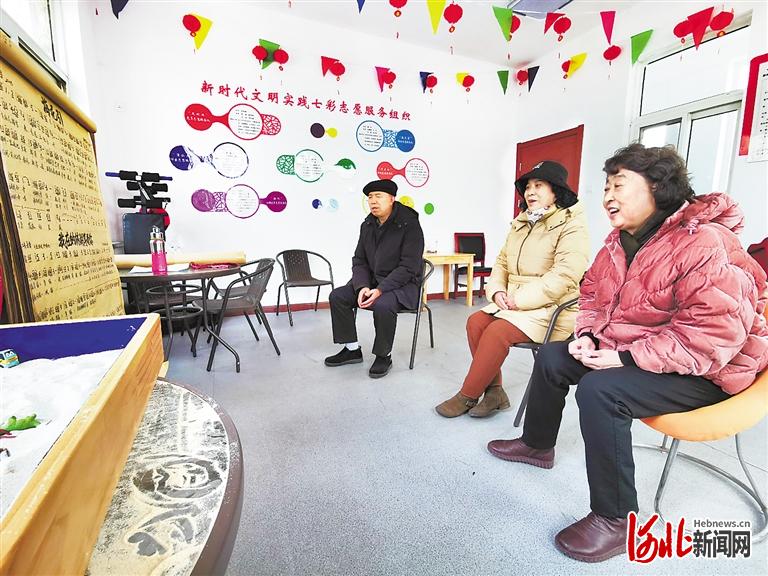 On January 27, residents are singing in the public center of Chenguang Community in Beidaihe District after the renovation. Photo by Shi Yuan/Hebei Daily

The public toilets in the south square of the Shanhaiguan Railway Station have an old fashioned style and ancient flavor with blue tiles and white walls, as well as antique doors and windows. The water flows automatically in marble washbowls. The independent compartment is clean and tidy, and the air freshener is sprayed regularly; there are baby seats, disabled toilets, calling buttons, and children’s toilets in the third bathroom, which is the same with that in the scenic spots.

“We have numbered and named each public toilet, and appointed special person to manage it, ensuring it is open 24 hours a day and cleaned for 8 hours, so that residents can enjoy the experience of ‘star-level public toilets’.” said Chen Hui, director of Shanhaiguan Environmental Sanitation Management Office, adding that in accordance with the requirements of building a national sanitary city, Shanhaiguan District has built 64 public toilets in crowded places, all of which reached the second and above standards.

Qinhuangdao City has launched 8 constructions of environmental sanitation facilities, vegetable markets, roads, toilets, parks and green spaces, old residential areas, urban villages, and urban-rural junctions, to promote the construction of urban infrastructure, improve the appearance of the urban environment, and fulfill the covenant of building the national sanitation city, which improved the quality of the city and the living environment, and warmed people’s hearts.

Qinhuangdao City has built and renovated 38 garbage collection stations, 3 transfer stations, and updated more than 600 fully automatic enclosed transport vehicles, fully realizing the tightness of garbage transportation; built and continued construction of 20 key roads of 11.7 kilometers, maintaining more than 1.15 million square meters of motor (pedestrian) sidewalks; invested more than 200 million yuan to upgrade the infrastructure of 38 vegetable markets in the built-up area... The city has significantly changed, and the people’s sense of happiness and gain have been greatly improved.

On the morning of January 28, at the north gate of Lifespace Shopping Mall in the center of Qinhuangdao, taxis and shared bicycles queued up neatly in two lines on both sides of the road, so that people can take after shopping.

“Taxis used to wait in line on one side, but it’s not convenient for passengers to board, and the shared bicycles were not placed in a proper way. We designated parking areas for shared bicycles and taxis, to regulate the parking order, and lay a good foundation for traffic safety.” said Ma Yan, a policeman from the Traffic Order Brigade of the Traffic Police Detachment.

City management is prior to the building. According to the standards of building the national sanitary city, Qinhuangdao City has improved the urban environment and quality through improving urban and rural environment, urban appearance, urban traffic order, vegetable markets, construction sites, old residential areas, urban villages, urban-rural junctions, and the “eight small” sectors.

Focusing on comprehensive transportation management, Qinhuangdao City has carried out a special rectification of urban traffic order, designating more than 33,000 parking spaces, adding more than 2,000 parking spaces for non-motor vehicles, and realizing the orderly parking of motor vehicles and non-motor vehicles on the main and secondary roads. The traffic order in the city has improved significantly. The cleaning of urban roads has been strengthened. The cleaning time of general streets is 15 hours, and main streets 17 hours. The mechanized cleaning rate of the roads reaches 96%.

“What benefits do the building of national sanitary city bring to the people?” The renovated Guangminglu Market in Daonan area of Haigang District will tell you the truth.

Various fruits and vegetables are neatly placed, delicious cooked are covered with transparent glass, the steamed buns are still hot...vendors in uniforms serve the customers warm-heartedly.

Since July 2019, Qinhuangdao Weimin Market Construction and Operation Co., Ltd. has invested about 10 million yuan, in accordance with the “Standardized Vegetable Market Setup and Management Standards” , to upgrade the messy open-air markets. The new market has been widely praised by citizens after one-year operation.

Continue to promote health education, and the health literacy of residents ranks first in Hebei province

Xuan Junxia, a health professional of Zaishui Yifang Community in Haigang District, is collecting information on the Spring Festival epidemic prevention knowledge on major official platforms, and sharing to the community grid managers through WeChat group, and then forwarding the building and unit chiefs, so that all the information can be seen by more than 9,000 residents in the community.

“According to the requirements of building the national sanitary city, we have set up 2 full-time and more than 200 part-time health education positions, offering health consultation, lectures, dance and vocal music  to residents, to meet their growing needs for a healthy life.” said community director Fei Limei.

In recent years, Qinhuangdao City has taken the health of the whole people as the starting point and end point of building the national sanitary city, fully relying on the advantages of the city’s life and health industry, comprehensively strengthening public health services, continuously meeting the public’s medical and health needs, and continuously improving residents’ health literacy.

Funing District has built a 3,000-meter health trail in the Zijinshan Park, to convey the concept of health, promote a healthy lifestyle, and improve the national fitness, integrating health and sports elements into the landscape, and attracting a large number of citizens to play and exercise.

Take care of people’s lives and health, and ensure their health and safety. With this as the goal, Qinhuangdao City is working on the campaigns of patriotic health.

——Carry out national fitness activities. Every year, 60 large-scale sports competitions and activities were held at the city level and above, and 200 large-scale mass competitions such as the city’s amateur basketball league, the national fitness badminton open, and the street skateboard open were held. At present, the ratio of the city’s regular participation in physical exercise is 30.95%. The coverage rate of community sports facilities is 100%.

From infrastructure construction to urban management, from living environment to physical and mental health, from scheme to reality, all the projects of building a National Sanitary City in Qinhuangdao have made great achievements, opening a new chapter of building a beautiful, harmonious, healthy and civilized city.